Investment grade credit performed strongly this week as spreads moved tighter throughout.  The Bloomberg US Corporate Bond Index closed at 135 on Thursday August 11 after having closed the week prior at 141.  The 10yr Treasury closed last week at 2.83% and is trading at 2.85% as we go to print on Friday afternoon.  On the economic front, the big news of the week was Wednesday’s CPI print which was the first data point that showed inflation might be slowing.  Both headline and core inflation came in below expectations and stocks rallied on the news but most market participants agree that the battle is far from over; but it is an encouraging sign nonetheless.  Through Thursday the Corporate Index had a negative YTD total return of -12.4% while the YTD S&P500 Index return was -10.89% and the Nasdaq Composite Index return was -17.31%.

Primary issuance continued to impress this week, although at a more subdued pace than the previous two weeks.  Just over $30bln of new debt was brought to market.  The primary market typically experiences a seasonal slowdown in the second half of August before things pick back up after Labor day.  There has been $890bln of new issuance YTD which trails 2021’s pace by 6% according to data compiled by Bloomberg.

Investment grade credit reported a second straight week of strong inflows.  Per data compiled by Wells Fargo, inflows for the week of August 4–10 were +$4.7bln which brings the year-to-date total to -$115.3bln. 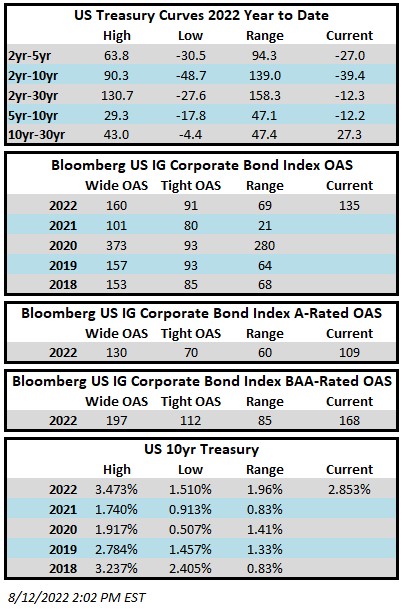