Spreads for corporate credit were generally tighter on the week.  After closing the week prior at a spread of 102, the Bloomberg Barclays Corporate Index closed Thursday evening at a spread of 96.  The tone at mid-day Friday is mixed as risk markets continue to weigh the impact of coronavirus.  Treasuries were volatile over the course of the past week.  The 10yr closed at 1.51% last Friday which was its lowest level of the year.  The benchmark rate then closed as high as 1.65% this Wednesday and is now fluttering around 1.58% on Friday afternoon. 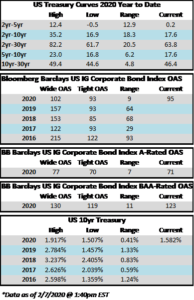 The primary market had a fair week as corporate borrowers issued over $21bln in new debt.   2020 issuance has eclipsed $154bln according to data compiled by Bloomberg.

According to Wells Fargo, IG fund flows during the week of January 30-February 5 were +$9.0bln making it the largest 5-week total for fund flows on record.  This brings year-to-date IG fund flows to over $36bln.  Both domestic and global investors continue to favor U.S. credit markets as one of the last bastions for reasonably safe yield.

Spreads drifted 2 basis points wider on the week with the OAS on the corporate index moving from 93 to 95.  Fears of a global health crisis drove Treasuries to 2020 lows and the 10yr is currently trading at 1.698% as we go to print, its lowest level of 2020.

It was another solid week for the primary market as over $25bln in new debt was priced.   January issuance has now topped $123bln which is up 46% relative to 2019’s pace according to data compiled by Bloomberg.  New deals of all stripes have been well oversubscribed and while there were still new issue concessions available they were quite slim, typically just a few basis points.

According to Wells Fargo, IG fund flows during the week of January 16-22 were +$4.8bln.  This brings year-to-date IG fund flows to over $20bln.  This is the third consecutive week of strong inflows into the IG credit market. 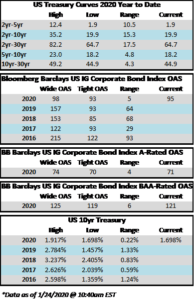 It was another busy week in the corporate credit markets; inflows remained robust, the new issue calendar continued to hum and the secondary market featured buyers grabbing for yield.  Risk markets have been incredibly resilient as they have shrugged off geopolitical turmoil and they seem to have little interest in impeachment or the upcoming presidential primaries and election.  The spread on the corporate index is one basis point tighter on the week, currently trading at 95.  The range in spreads on the index thus far in 2020 has been tight at just three basis points. 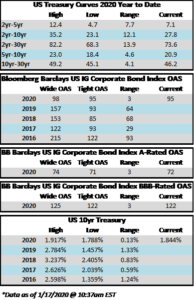 The primary market was busy again with more than $35bln in new debt coming to market on the heels of $60bln+ the week prior.  Demand was very strong as order books were well oversubscribed, even for companies with marginal credit metrics.  It is early in the year but so far new issue supply is 32% higher relative to last year, according to data compiled by Bloomberg.  Recall that CAM’s projection as well as the general consensus is calling for overall supply in 2020 to be down relative to 2019 especially on a net basis.  We expect that issuers will look to be quite active in the first half of the year and that issuance will be more subdued in the second half due to the uncertainty that typically accompanies a presidential election.  The consensus supply number for January is $120bln, according to data compiled by Bloomberg, so next week should be another solid week for issuance but will likely be somewhat lower than the previous two weeks due to earnings blackout periods.

According to Wells Fargo, IG fund flows during the week of January 9-15 were +$5.5bln.  This brings year-to-date IG fund flows to over $15.5bln, a strong start to the year.

Another week has come and gone and corporate bonds continue to inch tighter into year end.  The OAS on the Bloomberg Barclays Corporate Index opened the week at 99 and closed at 95 on Thursday.  Spreads are now at their tightest levels of 2019 and the narrowest since February of 2018 when the OAS on the index closed as low as 85.  Price action in rates was relatively muted during the week amid low volumes but Treasuries are set to finish the week a few basis points higher.  The 10yr opened the week at 1.87% and is trading at 1.91% as we go to print. 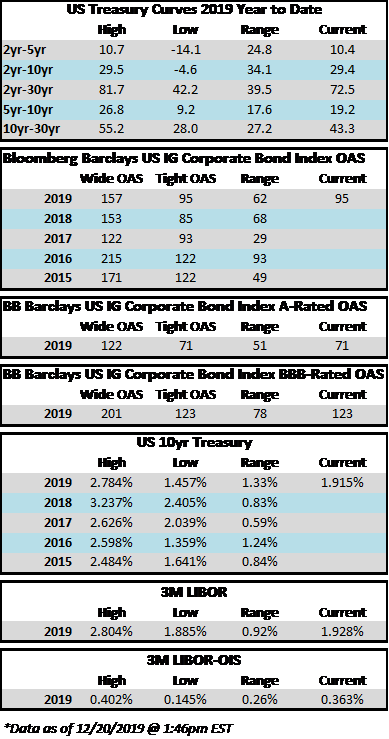 As expected, the primary market during the week was as quiet as a church mouse.  December supply stands at a paltry $18.9bln according to data compiled by Bloomberg.  2019 issuance stands at $1,110bln which trails 2018 by 4%.  As we look ahead to 2020, we expect robust supply right of the gates in January but the street consensus for 2020 as a whole is that supply will be down 5% relative to 2019.  Further, net supply, which accounts for issuance less the 2020 maturity of outstanding bonds, will be down substantially from prior years.  If these forecasts come to fruition then the supply backdrop could lend technical support to credit spreads in 2020.  Supply, however, is merely one piece of the puzzle.

The grind continues as the OAS on the Bloomberg Barclays Corporate Index breached 100 for the first time in 2019 with a 99 close on Thursday evening.  The index has not traded inside of 100 since March of 2018 and has averaged a spread of 127 over the past 5-years and 113 over the past 3-years.  Treasuries were again volatile on the week, especially Friday, which saw a range of 15 basis points on the 10yr Treasury.  However, as we type this during the late afternoon on Friday it appears that the 10yr is going to end the week almost entirely unchanged from the prior weeks close.

The primary market has entered year-end Holiday mode. Less than $4bln in new debt was brought to market during the week.   The first half of next week is the last chance for meaningful issuance in the month of December.  According to data compiled by Bloomberg, 2019 issuance stands at $1,110bln which trails 2018 by 4%. 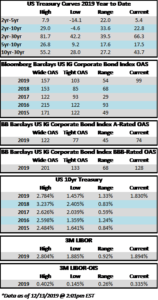 Credit spreads are set to finish the week generally unchanged but may be a touch wider in some spots when it is all said and done.  The spread on the Bloomberg Barclays Corporate Index opened the holiday shortened week at 105 and closed at 106 on Thursday.  There is positive sentiment in the markets on Friday morning amid China-US trade innuendo out of Washington.  For the second week in a row we have seen a relatively significant move in treasuries; last week it was higher rates and this week lower.  The 10yr Treasury closed the prior week at 1.94% and is now 1.83%, 11 basis points lower on the week as we go to print.

The primary market posted an impressive haul this week, especially considering the fact that the market was closed on Monday.  It was the second largest volume week of the year thanks to a big boost from AbbVie, which printed a $30bln deal that featured 10 different maturities.  With one deal pending this morning, weekly issuance will come in at the $50bln mark.  Oddly enough both the largest and second largest issuance weeks in 2019 have both come on holiday shortened weeks.  The largest volume week was the week of Labor Day when nearly $75bln of new debt was priced in just four days. According to data compiled by Bloomberg, 2019 issuance stands at $1,065bln which trails 2018 by -4.4%. 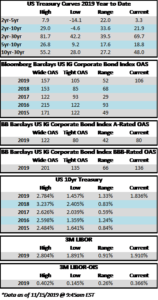 Credit spreads were tighter during the week and are now at the tightest levels of 2019.  The spread on the Bloomberg Barclays Corporate Index closed at 105 on Thursday and there is a positive tone in the air on Friday morning which could lead to an even tighter close as we head into the long weekend –the bond market is closed on Monday in honor of Veteran’s Day.  The move in Treasuries during the week has more than overshadowed tighter credit spreads.  It has been a quick and violent move higher in rates.  As we go to print the 10yr Treasury is over 22 basis points higher on the week while the 30yr is 21 basis points higher.  Unpredictability in rate moves is the principal reason that we are “rate agnostic” at CAM and instead focus on credit risk while avoiding interest rate speculation by always positioning investor portfolios in intermediate maturities.

The primary market got a decent start to the month as $21.8bln in new debt came to market.  The pace should pick up substantially as soon as next week due to pending M&A funding from AbbVie which could total near $30bln. 2019 issuance has now passed the trillion dollar mark and it stands at $1,014bln which trails 2018 by -7%. 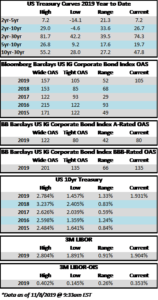 Credit spreads were turbulent during the week.  The first half of the week saw tighter spreads, and the OAS on the Corporate Index closed at 106 on Tuesday, the tightest level of 2019.  Spreads traded wider from there on the back of Fed commentary on Wednesday which was followed by a surprisingly weak Chicago PMI reading on Thursday morning leading to a close of 110 for the index on Hallows eve.  The economic news continued to roll in on Friday morning, but this time it was received in positive fashion as employment numbers beat market expectations.  As we go to print amid lighter volumes in corporates most bonds are trading 2-4 tighter which should see the index close right around 108.  If we do close at 108 then spreads will have finished the week unchanged.  Rates too were volatile during the week with the 10yr closing at 1.84% on Monday but it is now trading at 1.73% on Friday afternoon.  This is lower on the week, as the 10yr finished the week prior at 1.79%.

The primary market was somewhat more active this week but finished the month well shy of expectations.  October volume closed at $68.6bln versus dealer projections of $85bln according to data compiled by Bloomberg.  2019 issuance stands at $992bln which trails 2018 to the tune of -6%. 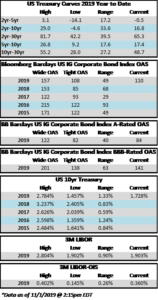 This year, CCC bonds are performing worse than the market even as the overall supply of the lowest-rated notes has been shrinking. There are about $156 billion of those bonds outstanding today, down from $167 billion in February. So far this year, CCC rated companies have sold around $24 billion of debt, less than the same period for each of the previous two years, according to data compiled by Bloomberg.

Spreads are tighter to the tune of several basis points on the week while Treasury rates crept higher. The OAS on the Bloomberg Barclays Corporate Index was 110 on Friday morning after having closed at 112 the week prior. Spreads have continued to grind tighter throughout the day as we go to print on Friday afternoon and the close on the index OAS is likely to come close to touching the year-to-date tight of 108. Treasury rates are set to finish the week higher with the 10-year up 5 basis points on the week.

The primary market continued its October trend with another week of lackluster supply. Weekly new issue volume was just shy of $14bln pushing the monthly total to $39.5bln according to data compiled by Bloomberg. 2019 issuance stands at $963bln trailing 2018 by nearly 8% on a relative basis. 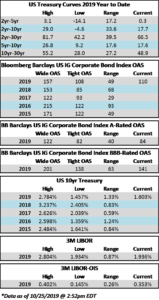 Spreads are tighter on the week amidst positive vibes in risk markets and the lack of meaningful new corporate supply.  The OAS on the Bloomberg Barclays Corporate Index is 113 on Friday morning after having closed at 115 the week prior.  Treasury rates have risen substantially since the beginning of October and the 10yr spent much of the week wrapped around 1.75%.

The primary market was subdued during the shortened week as the bond market was closed Monday for a federal holiday.  Weekly new issue volume was $10bln pushing the monthly total to $25.8bln according to data compiled by Bloomberg.  2019 issuance stands at $949bln. 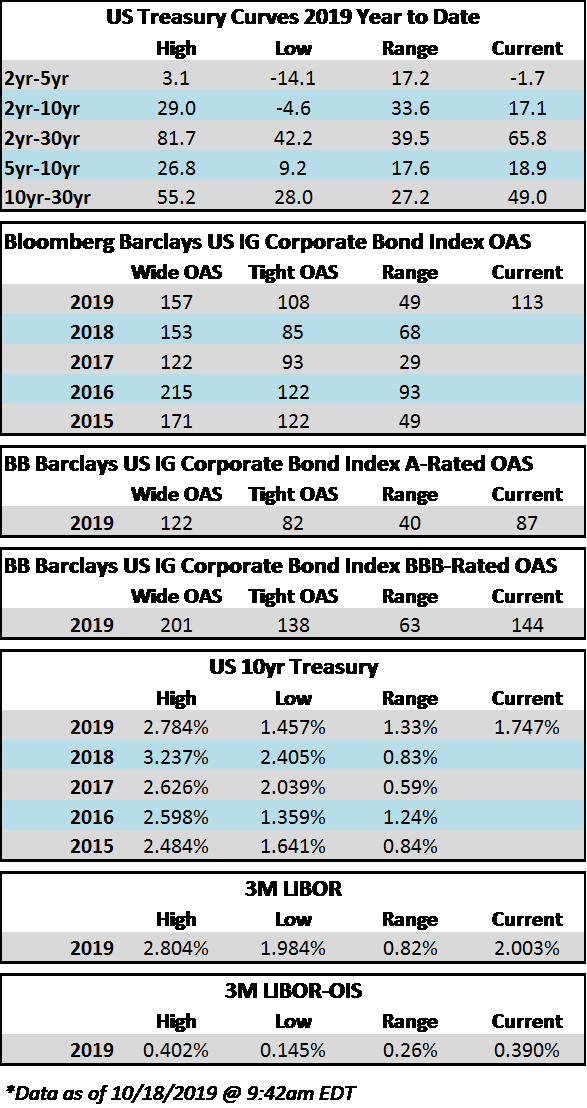