Spreads will finish the week meaningfully tighter.  Treasuries have also rallied this week which has led to positive performance across the fixed income landscape due to the one-two punch of tighter spreads and lower rates.  The Bloomberg Barclays US Corporate Index closed on Thursday November 19 at 109 after closing the week prior at 114.  Through Thursday, the corporate index posted a year-to-date total return of +8.77%.

The high grade primary market was active again with $40 billion of new debt having been priced this week across 35 deals according to data compiled by Bloomberg.  Next week is typically one of the slowest of the year in the bond markets, but if 2020 has anything to say about that it could be busier than expected.  The market is closed for Thanksgiving and then closes early at 2pm on Friday so any primary market activity will be on Monday or Tuesday of next week while the latter half of the week is likely to see little to no activity.   Monthly issuance for November has now eclipsed $83 billion while the yearly total keeps adding to its record size, now in excess of $1.7 trillion.

According to data compiled by Wells Fargo, inflows into investment grade credit for the week of November 12-18 were +$6.8bln which brings the year-to-date total to +$257.8bln. 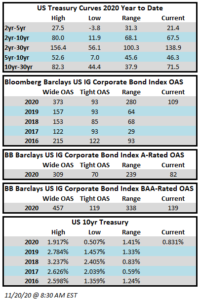