As summer winds down, it was another quiet week in the credit markets, and spreads are set to finish the week a touch wider on global trade concerns.

Per Bloomberg, there was just $2.5 billion of new issuance printed during the week. Bloomberg’s tally of YTD total issuance stands north of $774bn. 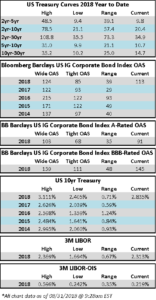