There was plenty of activity in the credit markets this week as the primary market was active right out of the gate on Monday. Contagion fears related to emerging markets weighed on spreads mid-week, particularly high beta, but by the time Friday afternoon rolled around, the spreads of most individual credits were unchanged to modestly tighter.

This was the busiest week of 2018 for investment grade issuance as over $53bln in new bonds were brought to market. Bloomberg’s tally of YTD total issuance stands at more than $826bln. 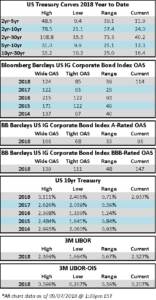 The yield on two-year Treasuries rose as much as 6 basis points Friday to 2.69 percent, the highest level since July 2008, after the U.S. jobs report for August showed an unexpected uptick in average hourly earnings growth. The better-than-anticipated data are helping to cement expectations for a Federal Reserve rate hike this month, while the odds of an additional increase by year end have also received a boost. 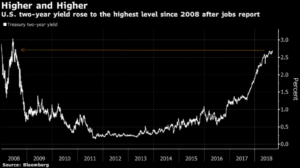