Corporate spreads rallied this week and the corporate index is 6 basis points tighter on the week as we go to print on Friday morning. The tone of the market remains firm this morning.

Per Bloomberg, $9.20 billion of new issuance printed during the week with no deals pending on Friday morning. This was lighter than consensus estimates, which had called for issuance of around $20bln.  Earnings blackout most likely played a role in abated issuance.  Bloomberg’s tally of YTD total issuance stands at $691.984bn.

Treasury rates opened higher on Monday but then remained unchanged throughout the week. All told, we are 6bps higher today on 10yrs relative to last Friday’s close. 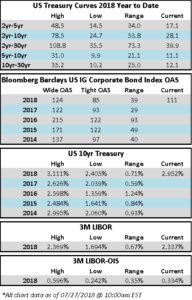