It was a wild ride for risk assets during the week and credit spreads will finish the week wider.  The Bloomberg US Corporate Bond Index closed at 144 on Thursday June 16 after having closed the week prior at 136.  The tape has been mixed throughout the day on Friday and is pointing toward a close that looks as though it will be unchanged from Thursday.  The 10yr Treasury is yielding 3.23% as we go to print after having closed the week prior at 3.16% as rates sold off on the back of last Friday’s CPI print which showed that inflation has yet to show signs of slowing.  The 10yr was as low as 2.75% during the last week of May so it has been a significant move in a short timeframe.  The tape was particularly bad for equities this week as there was a brief relief rally on Wednesday post-FOMC but then a violent sell-off on Thursday.  The major indices have been modestly green throughout the day on Friday.  Through Thursday the Corporate Index had a negative YTD total return of -14.99% while the YTD S&P500 Index return was -22.5% and the Nasdaq Composite Index return was -31.6%.

The Federal Reserve delivered a 75bp Fed Funds rate hike on Thursday in its goal to curtail inflation.  It was the largest such rate increase since 1994.  The Fed may well deliver another hike of that magnitude at its July 27 meeting but that depends largely on the economic data between now and then.

The new issue calendar was non-existent this week as precisely $0 in new bonds were issued.  It was the first week of no issuance in 2022 and the first week with no new bonds since 2020 according to Bloomberg. The expectation is that there will be some modest issuance next week if the market tone is constructive.  As we often like to say, the IG market is essentially never closed but it is not uncommon for issuers to wait for a positive tone to issue with the hope that there will be enough investor demand to offer them favorable pricing.  There has been $697bln of new issuance YTD which trails 2021’s pace by 5% according to data compiled by Bloomberg.

Investment grade credit saw a sizeable outflow on the week.  Per data compiled by Wells Fargo, outflows for the week of June 9–June 15 were -$6.4bln which brings the year-to-date total to -$98.2bln. 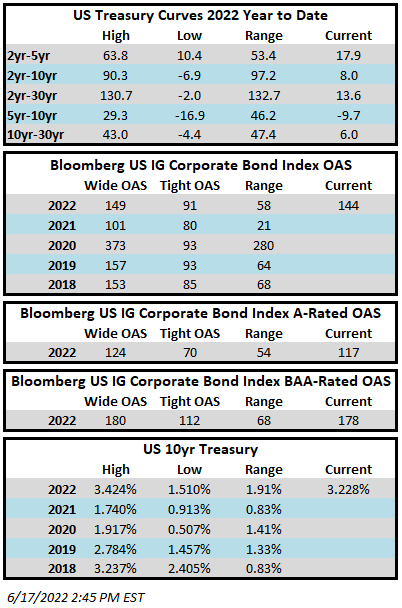