Credit spreads will finish this week markedly better and there were a couple trading days where spreads ripped tighter.  The Bloomberg US Corporate Bond Index closed at 149 last Friday which was its widest level of the year.  The index closed 13 basis points tighter this Thursday at 136 and the path of least resistance feels tighter as we go to print this Friday morning.  Volumes are muted this morning before the long weekend and the market closes early this afternoon.  The 10yr Treasury is yielding 2.72% as we go to print after having closed the week prior at 2.78%.  The Corporate Index had a negative YTD total return of -11.68% through Friday while the YTD S&P500 Index return was -14.35% and the Nasdaq Composite Index return was -24.96%.

New issue for the week was a complete bust and didn’t even come close to the consensus estimate of $20bln+.  There was only one deal this week for a total of $500mm making it by far the slowest issuance week of the year.  The month of May has also been very underwhelming relative to expectations with just $73.85bln in issuance, well below the average estimate of $135bln.  There are two factors at play here, and they are entirely different in nature.  Issuance this week was slow merely because of the time of year –companies are often hesitant to issue ahead of a long weekend, especially with an early close on Friday, as it is typically perceived as a slower time in the capital markets and company treasury departments and CFOs worry that demand may not be as robust as they would like.  Companies certainly did not choose to shelve deals this week because of the market tone as the market was quite strong.  The monthly miss versus expectations was most certainly due to the volatility that we experienced in the weeks preceding this one.  There were many days of wider spreads and bloodletting in equities that would have led issuers and their bankers to simply “wait for a better day” to bring anticipated deals.  Projections for next week suggest $25-$30bln of new issuance.  There remain several very large deals waiting in the wings related to M&A so we could see some of those issuers look to print in the coming weeks if the market tone remains positive.

Investment grade flows have shown signs of stabilization the past two weeks.  Per data compiled by Wells Fargo, flows continued their negative trend but it was once again a very modest outflow.  Outflows for the week of May 19–25 were -$1.1bln which brings the year-to-date total to -$68.3bln.  Combined redemptions the past two weeks were the smallest over any two week period dating back to March according to Wells. 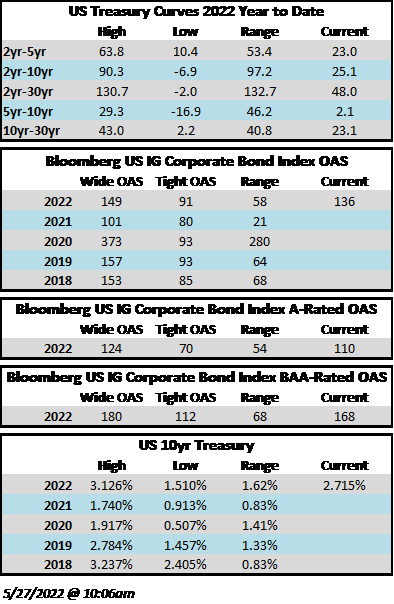