Spreads inched marginally tighter throughout the week.  The OAS on the Blomberg Barclays Corporate Index closed Thursday at 88 after closing the week prior at 90.  Spreads are near their tightest levels of the year across the board.  First quarter earnings season is in full swing now and Thursday was the busiest day yet, with 11% of the S&P 500 having reported on Thursday.  Earnings and economic data have been solid with 86% of S&P 500 companies that have reported so far beating estimates, according to data from Refinitiv. Treasury yields are slightly higher so far this week to the tune of 1-2 basis points.  Through Thursday, the corporate index had posted a year-to-date total return of -3.70% and an excess return over the same time period of +1.05%. 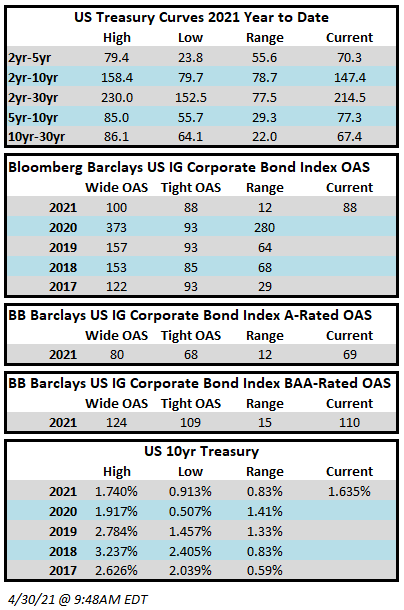 It was a muted week for the new issue market which is to be expected during the midst of earnings season.  Borrowers brought just $12.9bln of new debt during the week and $111 billion for the month of April.  The pipeline for issuance is building, however, and the consensus estimate for May issuance is $150 billion. According to data compiled by Bloomberg, $548bln of new debt has been issued year-to-date.

Per data compiled by Wells Fargo, inflows into investment grade credit for the week of April 22-28 were +$5.4bln which brings the year-to-date total to +$142.5bln.