Spreads will finish the week comfortably wide of the year-to-date tights that we saw 2 weeks ago.  It was a volatile week for rates and spreads and the OAS on the Bloomberg Barclays Corporate Index closed at 92 on Thursday evening after ending the week prior at 90.  Treasuries were relatively calm the first two days of the week before inching higher throughout mid-week as Fed Chairman Powell delivered some dovish remarks on Thursday afternoon.  The 10yr Treasury, which traded as low as 1.39% on Monday, had risen to 1.57% into the Thursday close.  Friday morning saw the release of an employment report that topped expectations, sending the 10yr even higher, up to 1.62%, but the sell off in rates quickly faded and most of Friday afternoon was been spent wrapped around 1.55%. Through Thursday, the corporate index had posted a year-to-date total return of -4.21% and an excess return over the same time period of +0.50%. 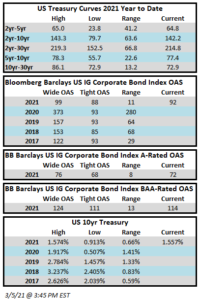 The high grade primary market had a huge week as 45 issuers defied volatility bringing more than $65bln in new debt.  Next week also looks like it could be a big number as inflows into the investment grade market have created good demand and issuers have been happy to oblige.

Per data compiled by Wells Fargo, inflows into investment grade credit for the week of February 25-March 3 were +$4.9bln which brings the year-to-date total to +$82bln.

As we move forward, it is now all quiet on the Fed front as the blackout period on public comment is now in effect.  The Fed meets March 16-17 so the market will have an interesting test over the next 2 weeks as it must interpret data on its own as opposed to parsing Fed-speak.