Spreads took a breather this week and may finish the week a touch wider when it is all said and done.  The Bloomberg Barclays US Corporate Index closed on Thursday July 31 at 133 after closing the week of July 20-24 at 131.  Through Thursday, the corporate index has posted a year-to-date total return of +8.35%.  Rates have continued to grind lower over the course of the past two weeks and the 10yr Treasury is flirting with its lowest levels of 2020. 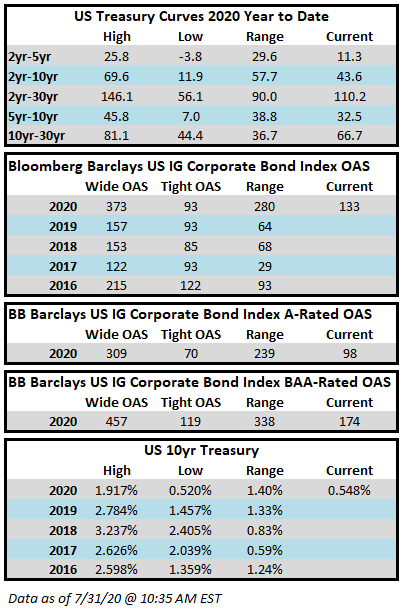 The high grade primary market was more active this week as borrowers brought just over $25bln in new debt to market.  According to data compiled by Bloomberg, $64.4bln in new debt was priced during the month of July which was underwhelming versus consensus estimates of $90-$100bln.  The primary market should continue to pick up in subsequent weeks as companies continue to report earnings, exiting blackout periods.

According to data compiled by Wells Fargo, inflows for the week of July 23-29 were +$10bln which brings the year-to-date total to +$92.9bln.