Spreads are tighter on the week and Treasuries are lower.  The OAS on the corporate index opened the week at 116 and is 114 as we go to print on Friday morning while the 10yr Treasury is at 1.767%,  12 basis lower from the previous Friday close.  In other news, as expected, the Fed cut the target rate on Wednesday by a quarter-point to 2%.  The direction of future cuts is much less clear with plenty of debate as to whether or not the Fed will cut again this year.  We tend to think it comes down to economic data and the Fed has been quite clear about this in our view.  The Repo market made headlines throughout the week due to a spike in repo-rates amid a supply-demand mismatch.  The Fed has since intervened and gotten the rates under control.  It remains to be seen as to whether this is much ado about nothing but so long as the Fed liquidity injections can manage to keep rates within the targeted range then we believe that this topic will go by the wayside.

In what seems to be a recurring theme, the primary market had yet another strong week.  Monthly volume has topped $140bln for September making it the 8th busiest month in history with more than a full week to go.  Year-to-date supply is now $905bln which is down a smidge less than 4% relative to 2018 supply at this juncture.  While it was a busy week in the primary market it was not quite as robust as the previous two –if $37bln manages to price by the end of the month then September 2019 would become the busiest month on record but with just 6 trading days left and quarter end looming we are probably not likely to see enough supply to topple the all-time high. 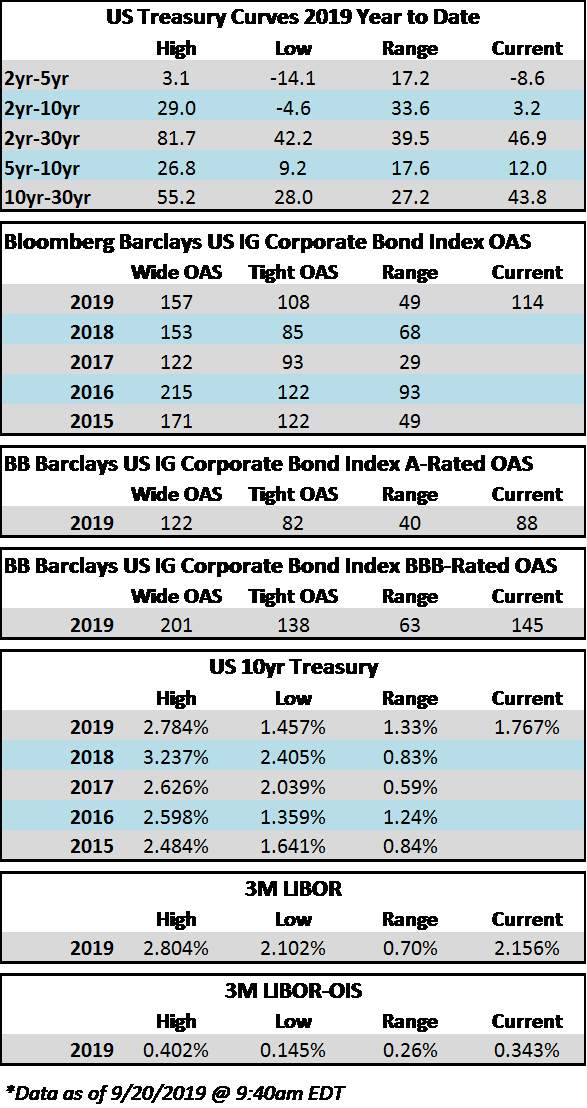