The corporate market was modestly wider on the week with the spread on the index 1 basis point wider week over week as we go to print on Friday morning.  Spreads have largely been in a holding pattern for the month of July, as the index opened the month at an OAS of 115 versus a 113 close yesterday evening.  The 10yr Treasury continues to hover just above 2% amid dovish commentary from Federal Reserve officials.  Media blackout begins tomorrow for Fed officials so we will get a respite from commentary until after the July 31 FOMC decision. 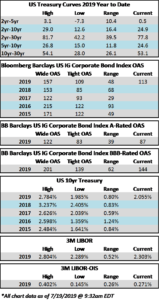 It was a quiet for the primary market as less than $15bln in new corporate debt was brought to the market which was underwhelming relative to the $30bln consensus figure.  According to data compiled by Bloomberg, year-to-date corporate supply has topped $600bln, which trails 2019 supply by 10%.