It was a bit of a see-saw week in the corporate market as the tone was very heavy on Monday but sentiment turned decidedly more positive on Tuesday and remained so throughout the rest of the week.  The OAS on the corporate index opened the week at 128 and widened to 130 going into Tuesday morning but we sit back at the 128 level as we go to print on Friday morning.  The biggest story of the week is Treasury yields, which are lower across the curve for the second consecutive week.  The 10yr Treasury is over 5 basis points lower on the week and sits at its lowest level of 2019 and the lowest levels we have seen since September 2017. 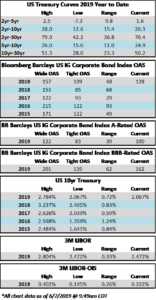 $23.4bln in new corporate debt was brought to the market this week.  New issue concessions remain low, having averaged 3.5bps thus far in 2019 according to data compiled by Bloomberg.  Of course, every deal is different and some deals have enjoyed more substantial concessions than others.  Year-to-date corporate supply has crossed the half trillion mark and sits at $511.1bln, which lags 2019 issuance by over 9% according to data compiled by Bloomberg.