It was another volatile week in the credit markets with wider spreads and lower rates. Through the close on Thursday evening, the Bloomberg Barclays Corporate Index was 8 basis points wider on the week while the 10yr Treasury is 9 basis points lower on the week as we go to print on Friday morning. The corporate index has now reached its widest levels year to date and is trading at an OAS of 145, its widest level since August of 2016. To put this into perspective, the index has had an average OAS of 108 over the past 12 months and 125 over the past 5 years. The long term average OAS is 133 dating back to 1988.

Investment grade borrowers printed a mere $4bln during a week where spreads inched wider day by day. The credit markets were also closed on Wednesday as a national day of mourning for formal President George H.W. Bush. According to Bloomberg, YTD corporate issuance has been $1.070 trillion.  Issuance is now down 11% YTD when compared to 2017 numbers. 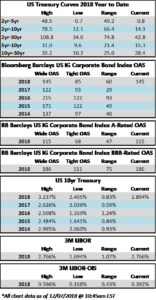