Credit markets are struggling to find footing, as the Bloomberg Barclays Corporate Bond Index opened Friday at an OAS of 135 which is the widest level of 2018. Investment grade credit has drifted wider since November 8, when the index closed at an OAS of 113. The move wider in credit over that timeframe has almost entirely been offset by rates, at least for the intermediate portion of the curve, as the 10yr Treasury has moved from 3.23% to 3.01%. Note that the front end of the yield curve has flattened substantially during the month of November and the spread between the 2yr and 5yr Treasury is down to a mere 3.3 basis points as we go to print. The investment grade corporate bond market currently has little appetite for idiosyncratic risk and we are seeing that reflected in the spreads of bonds for companies under duress, like General Electric, which continues to trade wider, seemingly day after day. BBB credit too has underperformed relative to single-A credit. Since November 8, the Corporate Index is 22 wider, while the BBB-rated portion of the index is 28 wider. The A-rated portion of the index has outperformed over that time period, having moved 17 wider.

According to Wells Fargo, IG fund flows during the week of November 22-November 28 were -$3.2 billion, which was the second largest outflow YTD. Per Wells data, YTD fund flows are +$82.148bln. 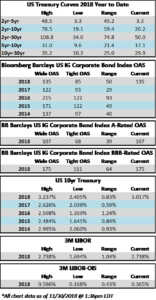