Corporate credit spreads are largely unchanged on the week. As expected, the Fed increased the Federal Funds Target Rate by 25 basis points on Thursday to an upper bound of 2.25%.  This was the third rate hike of 2018 and the 8th increase in the current tightening cycle which began in December of 2015.  Notably, the 10yr Treasury has trended modestly lower on the back of the Fed announcement –it was as high as 3.07% at noon on Thursday but today it is at 3.04% as we go to print.

According to Bloomberg, issuance on the week is going to come in at $12.7bln, as there is a small deal pending this Friday morning. This brings the September new issuance tally to $122.9bln and the YTD tally to over $895bn. September has now passed January as the month with the most issuance so far in 2018. 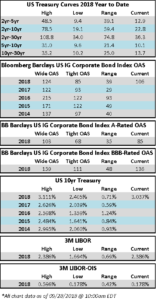 (Bloomberg) Why Comcast Is Paying Dearly for Britain’s Sky