Investment grade corporate spreads were essentially unchanged in what was a relatively quiet week for the credit markets.

Per Bloomberg, $8.25 billion of new issuance printed during the week. This paltry figure for issuance was unsurprising, as the last two weeks of August are typical very quiet on the issuance front.  August as a whole, however, has been fairly active all things considered, with $75bln of issuance so far in the month.  Bloomberg’s tally of YTD total issuance stands at $771.934bn. 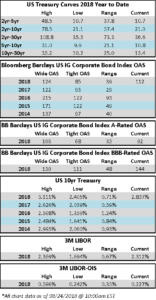 (Bloomberg) Utilities May Still Choose to Retire Coal, Not Upgrade Under EPA Plan