Trade concerns continued to weigh on debt and equity markets throughout the week. Spreads on the Bloomberg Barclays Corporate Index are 7 wider on the week as we go to print on Monday.  A deluge of corporate bond supply in the primary market has certainly helped to push spreads wider.  On Monday, Bayer printed a $15bln deal to fund its acquisition of Monsanto.  At the time, this was the second largest deal of the year, after the jumbo $40bln deal that CVS brought to market in early March.  Walmart would soon take the mantle of the second largest deal from Bayer as the retailer brought a $16bn deal on Wednesday to fund its acquisition of Indian-based ecommerce retailer Flipkart.

According to Wells Fargo, IG fund flows for the week of June 14-June 20 were -$1.4 billion. Even with the reversal in flows, IG flows are still positive at +$68.107 billion YTD.

Jumbo M&A led to one of the busiest new issue calendars that we have seen thus far in 2018. Per Bloomberg, over $43 billion in new corporate debt priced through Thursday.  This brings the YTD total to $636 billion. 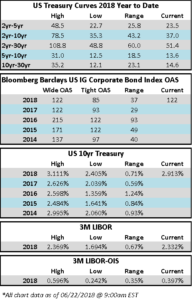