The trend of wider spreads was broken in a big way this week as credit is poised to finish the week meaningfully tighter.  The OAS on the Bloomberg US Corporate Bond Index closed at 127 on Thursday, March 17, after having closed the week prior at 143.  Spreads hit their widest levels of the year on Monday with a close on the index of 145 and Tuesday wasn’t much better at 144 but then the sentiment shifted in a big way on Wednesday and Thursday as spreads ripped tighter on the back of strong demand from all types of investors.  As expected the FOMC began a tightening cycle on Wednesday with a quarter point raise of the Federal Funds Rate.  The messaging from the Fed was slightly more hawkish than expected which resulted in some weakness in the Treasury market and slightly higher rates.  The Fed appears to be committed to curbing inflation while attempting to engineer a soft landing for the economy.  The Investment Grade Corporate Index had a negative YTD total return of -8.36% through Thursday.  The YTD S&P500 Index return was -8.6% and the Nasdaq Composite Index return was -14.1%.

The primary market was reasonably busy this week with $29 billion in debt having been brought to market.  Per Bloomberg, this boosted the monthly total for March to over $158bln.  There is a reasonably good chance that we could see over $200bln in new issuance before the month is over with consensus estimates calling for $30bln in supply next week.

Per data compiled by Wells Fargo, flows for investment grade were negative on the week.  Outflows for the week of March 10–16 were -$4.3bln which brings the year-to-date total to -$26.9bln. 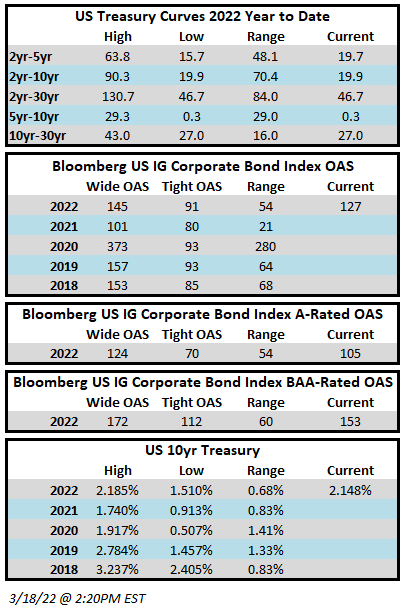