Spreads look to finish the week unchanged as Treasury yields inch higher.  The OAS on the Blomberg Barclays Corporate Index closed at 85 on Thursday October 7 after having closed the week prior at 84 but the market is trading tighter as we go to print mid-morning on Friday October 8.  Treasury yields have moved higher with each passing day throughout the week with the yield on the 10yr Treasury now above 1.6%, 14 basis points higher than where it finished the previous week.  Some of the move higher can be attributed to the payroll report on Friday morning, with early market commentary seeming to indicate it was “just barely okay enough” for tapering to begin as soon as the Fed meets in November.  However, it is worth noting that this was a big miss as payrolls increased by just 194,000 in September versus the 500,000 estimate – the smallest payroll gain thus far in 2021.  Through Thursday, the Corporate Index had posted a year-to-date total return of -1.67% and an excess return over the same time period of +1.82%. 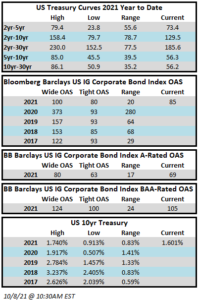 The primary market saw good activity during the week with $27.6bln in new bonds having been brought to market.   Activity is likely to slow as earnings season begins and estimates are calling for around $15bln next week.  According to data compiled by Bloomberg, $1,149bln of new debt has been issued year-to-date.

Per data compiled by Wells Fargo, inflows into investment grade credit for the week of September 30–October 6 were +$804mm which brings the year-to-date total to +$305bln.