Spreads are set to finish the week wider to the tune of 1-2 basis points.  The OAS on the Bloomberg Barclays Corporate Index closed Thursday August 5 at a spread of 88 after having closed the week prior at 86.  We are going to print amid a positive market tone on this Friday morning after a strong unemployment report.  The yield on the 10yr Treasury traded higher this week but most of that move occurred this morning after the aforementioned employment report.  The 10yr closed last week at 1.22% and is trading at 1.28% at the moment.   Through Thursday, the Corporate Index had posted a year-to-date total return of +0.08% and an excess return over the same time period of +1.54%. 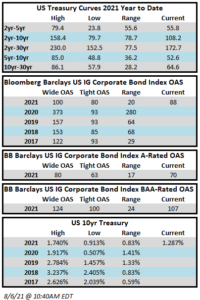 It was the busiest week for the new issue market in over 2 months according to Bloomberg, as weekly volume eclipsed $32bln.  Next week should also see brisk issuance before things slow down at the end of August for the last salvo of summer vacations. According to data compiled by Bloomberg, $909bln of new debt has been issued year-to-date.

We have seen more of a two-way flow in the market the past several weeks.  The reopening trade has lost some steam as investors weigh the risks of the delta variant.  For most of 2021, credits levered to reopening were in the midst of a one-way trade to tighter spreads and lower yields but those credits have seen mixed and in some cases poor performance in recent trading sessions.

Per data compiled by Wells Fargo, inflows into investment grade credit for the week of July 29–August 4 were +$5.7bln which brings the year-to-date total to +$247bln.