Spreads continued to trade sideways this week, having exhibited little change, though the index itself did hit a new mark for its tightest level of the year when it closed Wednesday at a spread of 80.  The OAS on the Blomberg Barclays Corporate Index closed Thursday July 1 at a spread of 81 after having closed at the same level the week prior.  The 10yr Treasury traded slightly lower throughout the week and a payroll report on Friday that modestly beat expectations did nothing to change the direction of that trade.   Through Thursday, the Corporate Index had posted a year-to-date total return of -1.34% and an excess return over the same time period of +1.97%.

New issuance volume was light during the week which was expected given the timing of quarter end and the 4th of July holiday.  $11.9bln of new debt was priced during the week, with the bulk of that consisting of an outsize $8bln print by Salesforce.  According to data compiled by Bloomberg, $790bln of new debt has been issued year-to-date.   Consensus estimates are looking for $15-20bln of issuance next week, which will consist of only 4 trading days.

Per data compiled by Wells Fargo, inflows into investment grade credit for the week of June 24–30 were +$3.5bln which brings the year-to-date total to +$208bln.

Have a safe and enjoyable 4th of July. 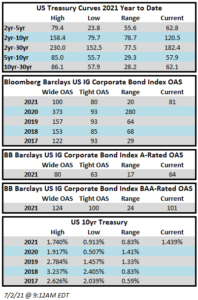