Spreads were mixed during the holiday shortened week and look likely to finish close to unchanged or perhaps a touch wider after it is all said and done.  The Bloomberg Barclays US Corporate Index closed on Thursday September 10 at 131 after closing the week prior at 129.  The market has a firmer tone as we got to print on Friday morning, which is a day of remembrance for those that we lost on September 11, 2001.  Through Thursday, the corporate index has posted a year-to-date total return of +7.07% versus +4.74% for the S&P500.  Treasury yields fluctuated throughout the week and are looking to finish modestly lower versus the week prior.  Treasuries were not nearly as volatile as equity markets which saw a continuation of the tech-related whipsaw which developed in the latter half of last week.

To say that the high grade primary market was active this week would be an understatement, especially considering that Monday was a holiday.  Through Thursday 44 investment grade companies sold over $65 billion in new debt according to data compiled by Bloomberg.  This is a remarkably high total over the course of just 3 trading days.  Next week is expected to be busy as well with consensus estimates calling for $40bln in new supply.  It is a good time to be an issuer with attractive borrowing costs and robust demand.

According to data compiled by Wells Fargo, inflows for the week of September 3-9 were +$6.4bln which brings the year-to-date total to +$163bln.  This was the 22nd consecutive week of inflows into the investment grade corporate bond market. 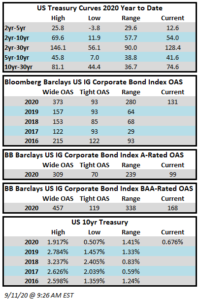