Spreads are set to finish the week wider, giving back some of the big move tighter from last week.  The Bloomberg Barclays US Corporate Index closed on Thursday June 11 at 161 after closing the week of June 5 at 146.  The corporate index was a beneficiary of lower Treasuries and the total return for the year through Thursday inched higher to +4.10%.  This week saw spreads move modestly tighter on Monday followed by moves wider on Tuesday and Wednesday followed by a violent move wider on Thursday.  The tone was more positive on Friday with spreads moving tighter, recouping some of the move wider from the prior three days.  Rates moved lower throughout the week to the tune of about 10 basis points versus the week prior which saw a close on the 10yr Treasury of 0.895% vs sub-0.70% as we go to print.

The primary market saw its slowest week since early March with just over $25bln in new corporate bond issuance.  The Fed meeting on Wednesday and market rout on Thursday were the one-two punch that kept issuers at bay.  Supply is expected to pick-up again next week with preliminary expectations calling for $40-$50 billion of supply according to data compiled by Bloomberg.

According to data compiled by Wells Fargo, inflows for the week of June 4-10 were +$13.6bln which brings the year-to-date total to -$-12.7bln.  This extends the 10-week streak of inflows to $89bln+ for investment grade funds. 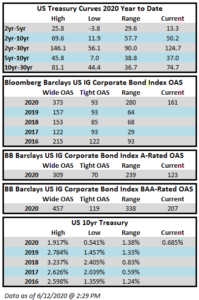