Spreads got back on the tightening track this week after finishing the prior week slightly wider.  The Bloomberg Barclays US Corporate Index closed Thursday at an OAS of 202 after closing the prior week at 209. The market was mixed throughout the day on Friday but softer equities weighed on credit spreads pushing them wider at the margin.  Recall that the wide for the index was a 373 OAS on March 23.  Through Thursday, the index total return for the year was +1.42%.

The primary market made history yet again as $285 billion priced in the month of April, the largest monthly tally on record.  The previous record was this March which saw $259 billion in new debt.   It does not appear that issuance will slow down anytime soon even amid earnings season as borrowers look to lock in financing in the face of uncertainty.  Borrowing costs remain quite low by historical standards thanks to low Treasury rates.

According to data compiled by Wells Fargo, inflows for the week of April 23-29 were +$5.3bln which brings the year-to-date total to -$86.8bln. 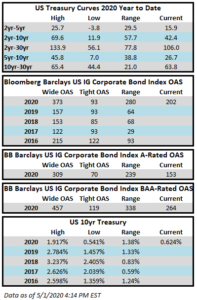