Spreads ripped tighter during the week as risk assets of all stripes performed well on the back of extraordinary support from the Federal Reserve.  The Bloomberg Barclays US Corporate Index closed the holiday shortened week at an OAS of 233, a whopping 50 basis points tighter from the previous Friday close and over the course of just four trading days.  Through Thursday, the index total return for the year was -1.01% after having been down over -10% at one point just a few weeks ago.  The big announcement of the week came on Thursday morning as the Fed provided more details for its previously announced plans as well as additional support for the corporate credit markets.  The announcement sent spreads sharply tighter into the long weekend. 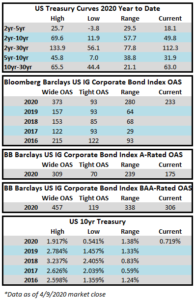 The primary market posted another strong week.  Over a dozen issuers priced more than $37 billion in new corporate debt over the course of the first three trading sessions this past week.  Thursday was essentially a “no-go” as there was an early market close for Easter weekend which made the timing of new issuance prohibitive.  Consensus estimates for issuance next week are strong again, with most prognosticators coming in around $40bln.

Investment grade credit saw inflows for the first time in five weeks.  According to data compiled by Wells Fargo, inflows for the week of April 2-8 were +1.9bbln which brings the year-to-date total to -$30.5bln.  As we have alluded to in previous commentaries, if the market starts to see consistent inflows then that could provide a tailwind for credit spreads.