Spreads are set to finish the week modestly tighter while Treasuries are at the forefront with the 10yr now 30 basis points higher from last Friday’s close of 1.560%. The OAS on the corporate index closed at 117 on Thursday after closing the prior week at a spread of 119. Equity indices are trading near or above all-time highs as risk markets cling to any glimmer of hope or positive headline that might indicate U.S.-China trade progress. At CAM we remain skeptical of a near term trade resolution and are cautious in our positioning as a result. 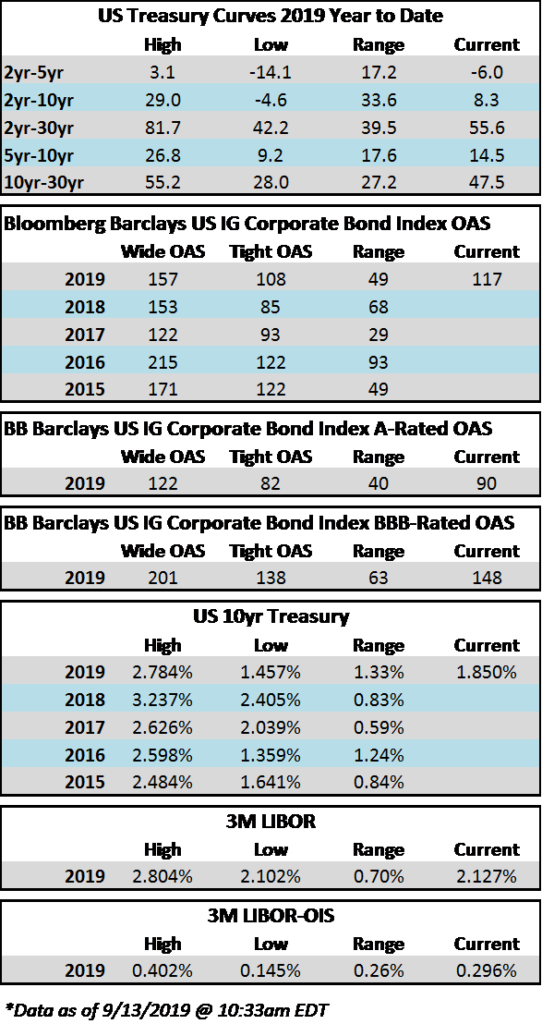 The primary market had another strong week after posting its busiest week ever in the previous weekly session. Nearly $42bln of new corporate debt was brought to the market making it the 3rd busiest week of the year according to data compiled by Bloomberg. Monthly volume has topped $116bln while year-to-date corporate supply stands at $882bln. After having trailed 2018 issuance by as much as 13% in June, 2019 year-to-date issuance is now down just 2% from the prior year. It will be interesting to see how the violent move higher in rates may affect the primary market going forward as higher rates may serve to delay some issuance as borrowers weigh funding costs relative to long term capital allocation plans.

(Bloomberg) Elliott’s $3.2 Billion AT&T Bet Signals ‘There Will Be a Fight’