Spreads are set to finish the week tighter, a remarkable feat considering the tsunami of new issue supply.  The OAS on the corporate index closed at 120 on Thursday after closing the prior week at a spread of 120 but as we go to print on Friday afternoon spreads have ground tighter throughout the day.  The 10yr Treasury is 1.54%, essentially unchanged on the week but it had traded as low at 1.45% on Wednesday before positive headlines related to trade sparked a sell-off into the Thursday open.

The primary market just capped off the busiest week in its entire history, and in a holiday shortened week with a jobs report to boot.  Corporate borrowers brought over $75bln in new debt during the week, smashing the previous 2013 record of $66bln.  According to data compiled by Bloomberg, year-to-date corporate supply stands at $840bln.  After having trailed 2018 issuance by as much as 13% in June, 2019 year-to-date issuance is now down just 2% from the prior year.  The fact that secondary market spreads tightened amid such staggering supply speaks to the insatiable demand for IG U.S. corporate credit. 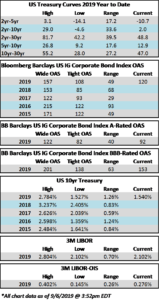