Spreads are likely to finish wider for the second consecutive week.  The OAS on the corporate index is at 124 this morning after closing the prior week at a spread of 120.  Spreads opened the previous week at 113, so the move wider in credit has been meaningful over the course of the past two weeks, but this move has largely been overshadowed by lower Treasuries.  The 10yr is wrapped around 1.54% as we go to print after having closed the week prior at 1.74%.  The 10yr closed the month of July at 2.01%.  The move lower in rates has been quick and intraday ranges have been volatile with the 10yr trading below 1.5% on Thursday while the 30yr traded below 2% for the first time in history.  For all the volatility in rates and spreads the corporate market has a positive tone as we go to print Friday morning.  There are not many sellers of corporate credit while buyers are plentiful.  This has made it difficult to find attractive bonds in recent weeks but we at CAM are chipping away and finding select opportunities in credit. 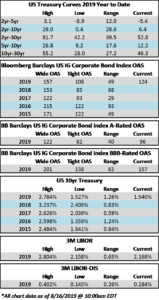 The primary market continues to show resiliency amid a volatile tape.  Corporate borrowers brought $23bln in new debt during the week, pushing the month to date total north of $64bln.  According to data compiled by Bloomberg, year-to-date corporate supply stands at $754.7bln, which trails 2019 supply by 6%.  The primary is set to enter a quiet period for the final two weeks of August before ramping up after Labor Day.  September has historically been among the strongest months for the new issue calendar.

Fund flows into investment grade corporates were strong for the second consecutive week.  According to Wells Fargo, IG fund flows during the week of August 8-14 were +$5.4bln.  This brings YTD IG fund flows to +$174bln.  2019 flows to this juncture are up 6.7% relative to 2018.