Amid a deluge of new issue supply and a weaker macroeconomic backdrop, we can finally say that the investment grade credit markets experienced a week of notable spread widening.  The spread on the corporate index closed Thursday at 116, 4 basis points wider on the week and 7 basis points off the lows from mid-April.  China trade headlines have dominated the tape this week which has led to volatility in the equity markets that has subsequently spilled over into the credit markets.  The impact to corporate credit has been relatively muted thus far but we would welcome short term bouts of volatility in our market as that has the potential to allow us to be more opportunistic in our purchases for the portfolios we manage. 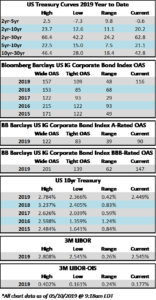 $45.65bln of new corporate debt was issued this week led by Bristol-Myers and IBM.  On Tuesday, BMY printed $19bln in new bonds which at the time was the largest deal of 2019 and the 10th largest of all time.  BMY was bested by IBM a mere 24 hours later as Big Blue printed $20bln in new debt to fund its purchase of Red Hat, tied for the 7th largest bond deal of all time.  It is worth noting that, although CAM is a regular participant in the new issue market, we did not see value in either of these deals so we remained on the sidelines awaiting better opportunities.  $51.9bln of new corporate debt has been priced in the month of May and the year-to-date tally of new issuance is up to $439bln according to data compiled by Bloomberg. 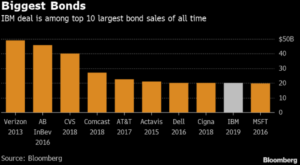