The investment grade credit market traded sideways this week as the OAS on the corporate index looks to finish relatively unchanged.  Spreads continue to remain near their tightest levels of 2019 which has been the case since mid-April.  It was a busy week for earnings and it was feast or famine for some large-cap firms.  Companies like Microsoft and Amazon produced some exceptional results while on the other hand Intel and 3M had lackluster earnings prints.  On the Treasury front, rates are lower by 3-5 basis points across the curve on the back of an economic release that showed inflation measures are slowing.

It was an extremely quiet week for corporate issuance as companies brought just $5.65bln of new corporate bonds.  Earnings blackout periods will likely continue to have an impact on issuance for the next several weeks.  $50.8bln of new corporate debt has been priced in the month of April and the year-to-date tally of new issuance is up to $371bln according to data compiled by Bloomberg. 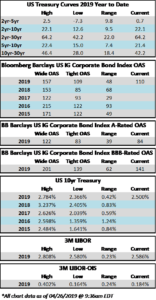