The investment grade credit markets look to finish the week marginally tighter.  After opening the week at 123, the OAS on the corporate index closed on Thursday at 121, near the YTD low of 120.  The 10yr Treasury is 4 basis points lower on the week as we go to print and it is 15 basis points lower than where it closed on the first trading day of March. 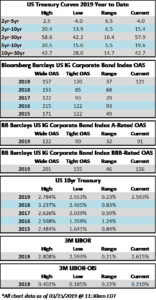 It was yet another solid week of issuance as IG firms issued just over $25bln in new corporate debt during the week.  New issue concessions remain razor thin and in some cases turned negative as investors “pay up” for the liquidity that it is afforded by the availability of new debt.  At the midpoint of the month, $64bln in new debt has been issued which brings the YTD tally to $268.498bln according to data compiled by Bloomberg.

(Bloomberg) U.S. Junk Bonds May Be Signaling That It’s Time to Be Cautious