Credit spreads look to finish the week tighter, as the Bloomberg Barclays Corporate Bond Index opened Friday at an OAS of 114 after starting the week at 117. As we go to print, the 10yr Treasury sits at 3.223%, which is 1 basis point higher relative to its close a week prior.

According to Wells Fargo, IG fund flows during the week of November 1-November 7 were +$2.7 billion with short duration funds posting a record +$3.6 billion inflow. Per Wells data, YTD fund flows are +$98.796bln. 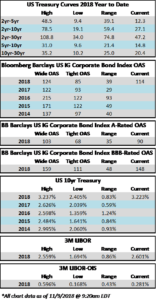