It was another week of volatility in risk assets, but the tone improved throughout, and was cemented by an above-consensus monthly employment report on Friday morning. Credit spreads are at 3-month wides as the Bloomberg Barclays Corporate Index sits at an OAS of 119. As we go to print, positive economic data has sent the 10yr Treasury to its highest level of the week, at 3.17%.

According to Wells Fargo, IG fund flows during the week of October 25-October 31 were a mere $192 million. Per Wells data, this extended MTD outflows to -$7.4bln and marks the first monthly outflow for IG credit funds since January of 2016. Even still, IG fund flows remain firmly positive YTD at +$96.150bln, with short duration funds garnering the lion share of those flows. 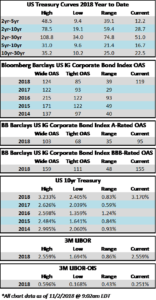