Amid the backdrop of a volatile equity market, corporate credit spreads are meaningfully wider on the week as we go to print, with credit spreads at least 5 wider across the board. On Friday afternoon, the 10yr Treasury stood at 3.08%, which is 11 basis points lower on the week.

According to Wells Fargo, IG fund flows during the week of October 18-October 24 were -$1.6bln. Per Wells data, this was the fourth consecutive weekly outflow for a cumulative total of -$7.2bln over that time period.  IG fund flows are now +$96.342 billion YTD.

According to Bloomberg, new corporate issuance on the week was less than $6bln. This was an underwhelming issuance figure relative to market expectations of $15-20bln, with the weak tone of the market keeping issuers at bay.  Issuance for the month of October stands at $75bln while YTD issuance is $971.559bln. 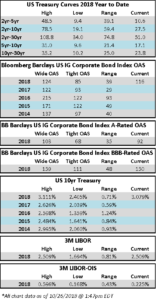