According to Bloomberg, $20.95bn in new corporate debt priced during the week. This brings the YTD total to $413.12bn.  Historically, May is typically a robust month for new corporate bond issuance and the general consensus on the street is that issuance will pick up in the month of May as companies exit earnings blackout.

The Bloomberg Barclays US IG Corporate Bond Index closed on Thursday with an OAS of 108, while the 10yr treasury breached the 3.00% threshold this week for the first time since January of 2014. 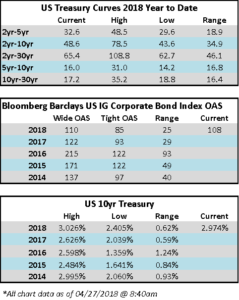 (WPO) What Comcast’s $31 Billion Offer for a U.K. TV Company Tells Us About the Cable Giant’s Ambitions