Fund Flows & Issuance: According to Wells Fargo, IG fund flows for the week of March 15-March 21 were a positive $167 million, though flows have slowed now for four consecutive weeks. The data analyzed by wells shows that longer duration funds are gathering flows at the expense of shorter duration funds.  This is in contrast to Lipper data, where IG saw a solid inflow of $3.5bn versus the 4-wk Lipper average of +$1.6bn.  HY outflows continue, with Lipper reporting an outflow of $1.17bn taking YTD outflows to nearly $18bn for the HY asset class.

The IG new issue calendar saw $26.875bn price on the week, as Anheuser-Busch InBev led the way with a $10bn print across six tranches. Corporate issuance is down 18% y/y but there are several large M&A related deals waiting in the wings that could narrow this gap substantially in the coming weeks.  It is also likely that the market tone and renewed volatility in stocks and rates are keeping some issuers on the sidelines for the time being.

The Bloomberg Barclays US IG Corporate Bond Index opened on Friday with an OAS of 109, which is widest level yet seen in 2018. 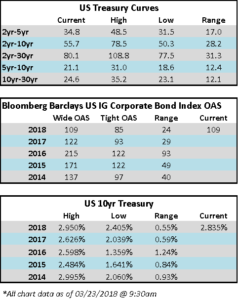 (Bloomberg) PG&E Has a Plan to Prevent More Deadly Wildfires